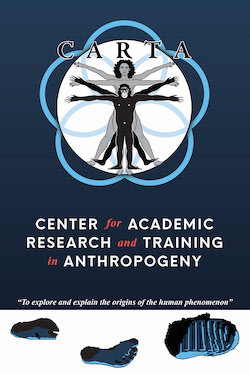 The Center for Academic Research and Training in Anthropogeny* (CARTA) is a virtual organization formed in order to promote transdisciplinary research into human origins, drawing on methods from a number of traditional disciplines spanning the social, biomedical, biological, computational and engineering, physical and chemical sciences, and the humanities. CARTA began as a collaboration between faculty at UC San Diego and at the Salk Institute for Biological Studies, along with interested scientists at other institutions. In January 2008, CARTA became a UC San Diego recognized Organized Research Unit (ORU).

*Anthropogeny: The investigation of the origin of man (humans) Oxford English Dictionary, 2006. First used in 1839 edition of Hooper's Med. Dict. and defined as "the study of the generation of man".

CARTA was founded on the conviction that answers are likely to come not from a single line of investigation, but from a wide variety of approaches within the biological, biomedical, and social sciences, as well as aspects of the arts and humanities, with important technological input from the physical, chemical, and computing sciences.

There is also a practical side to anthropogeny as the study of human origins has a major impact on, and relevance to, issues related to medicine, biology, the organization of society, the upbringing of our young, and the interactions of humans with one another and with our environment.

While interest in our origins is far from new, we humans now have the ability to approach anthropogeny in a systematic and multidisciplinary manner. We can and must integrate the vast amount of relevant information coming in from so many different fields, such as comparative genomics, to expand our understanding of language, behavior, and culture. CARTA brings together scholars with expertise spanning all of the relevant fields, and facilitates the speed of progress through transdisciplinary collaborations, as opposed to the old model of interdisciplinary collaborations between two disciplines.

Such group efforts can also generate novel, testable hypotheses and agendas for fruitful research while training a new generation of young minds dedicated to the pursuit of the problem and its many practical and philosophical implications.

The Origins of CARTA

Researchers in diverse fields related to anthropogeny began meeting in the La Jolla area in the late 1990s, an effort coordinated by the UC San Diego Project for Explaining the Origin of Humans (POH). The group consisted of experts in San Diego and many others from around the world. The primary activity of the group was to organize transdisciplinary meetings in La Jolla, and to facilitate interactions via the internet.

As many intellectual and practical opportunities surfaced, the original Project was re-established in January 2008 as a formal Organized Research Unit (ORU) at UC San Diego and in close collaboration with interested faculty at the Salk Institute for Biological Studies.  Thus, the Center for Academic Research and Training in Anthropogeny, or CARTA, was founded.

CARTA is a larger and more publicly active research program than POH, and one that facilitates graduate and postgraduate education in relevant departments and programs to equip the next generation of scholars who will formulate and address questions concerning the origins of humanity.

To learn more about the origins of CARTA, download the Evolution of CARTA timeline or It So Happened: James Harvey Handelman and the Origins of CARTA. 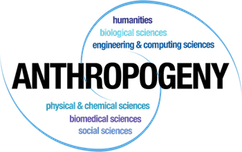 The goals of CARTA are essentially scholarly, with attention to minimizing the usual obstacles of academia (e.g. organizational structures, hierarchies, paperwork and bureaucracy). The major interests of the group are:

Thus, the broad topic areas of interest are:

Interested in learning more about CARTA? We invite you to download the CARTA brochure, which provides a concise overview of CARTA's mission and educational programs.