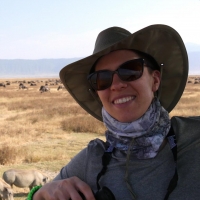 Alison Caldwell completed her Ph.D in Neurosciences in 2019 at UC San Diego, where she was a member of Dr. Nicola Allen’s lab at the Salk Institute. Alison worked to answer questions about the role of astrocytes in synaptogenesis: How do astrocytes time their release of synaptogenic factors? What are the identities of these factors? How are they secreted by the astrocytes? What are the neuronal receptors responding to them? How do genetic mutations affect astrocyte function and how do those changes manifest physiologically and behaviorally? In many neurodevelopmental disorders associated with alterations in synapse formation, such as Fragile X Syndrome, Rett Syndrome, and Down Syndrome, changes in astrocyte function seem to play a large role in the pathology of the disease. Her work identified several changes in astrocyte-secreted protein factors that had effects on neuronal growth and development in vitro, indicating that they may be candidates for new drug therapies. Alison now works as an institutional science writer in Chicago, writing about the work of physicians and scientists at an academic medical center. She is also the co-creator, writer, and host of Neuro Transmissions, an award-winning YouTube channel all about the brain, and the author of Brains Explained: How They Work & Why They Work That Way, a pop science book about the past, present and future of neuroscience and psychology research.