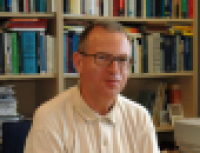 Bernard Comrie is Distinguished faculty Professor of Linguistics at the University of California, Santa Barbara. He was formerly Director of the Department of Linguistics at the Max Planck Institute for Evolutionary Anthropology, Leipzig, Germany.  His main interests are in language universals and typology and in language history. His work in the former area has a strong empirical component and is based in part on fieldwork on hitherto little investigated languages of New Guinea, the Caucasus, and elsewhere; a summary is provided by his book Language Universals and Linguistic Typology (Oxford/Chicago 1989). In the second area he is interested in the interaction of genealogical factors ("language families") and language contact in determining similarities and differences among languages and as a guide to linguistic and demographic prehistory; this has led him to undertake collaborative projects with geneticsts. His interest in both the structure and the function of language has led him to combine both formal and functional approaches to the structure and history of language.