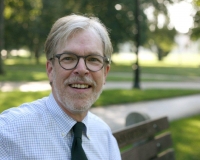 Clark Spencer Larsen is Distinguished University Professor at The Ohio State University. He received his Ph.D. in biological anthropology from the University of Michigan. Dr. Larsen is a member of the National Academy of Sciences and Fellow of the American Association for the Advancement of Science.  He is a former president of the American Association of Physical Anthropologists and editor-in-chief of the American Journal of Physical Anthropology. Larsen is an authority on bioarchaeology, the study of human remains from archaeological settings. His research focuses on biocultural adaptation during the last 10,000 years of human evolution, with particular emphasis on the history of health and lifestyle. He is co-director of the Global History of Health Project, an international collaboration involving the study of ancient skeletons from all continents in order to track health changes during the Holocene. He also co-directs the recovery and study of human remains from Catalhoyuk, Turkey, one of the earliest farming communities in the world. He is the author of numerous scientific articles and has authored or edited 30 books and monographs, including Bioarchaeology: Interpreting Behavior from the Human Skeleton (Cambridge University Press), Skeletons in Our Closet: Revealing Our Past through Bioarchaeology (Princeton University Press), and a leading textbook, Our Origins: Discovering Physical Anthropology (W.W. Norton). He is the founding editor of the book series, Bioarchaeological Interpretations of the Human Past: Local, Regional, and Global Perspectives (University Press of Florida).