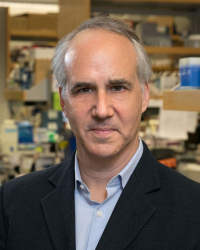 Daniel Geschwind is the Gordon and Virginia MacDonald Distinguished Professor of Neurology, Psychiatry and Human Genetics at UCLA and serves on the CARTA External Advisory Board. In his capacity as Senior Associate Dean and Associate Vice Chancellor of Precision Health, he leads the Institute for Precision Health (IPH) at UCLA. In his laboratory, his group has pioneered the application of systems biology methods in neurologic and psychiatric disease, with a focus on autism spectrum disorders (ASD) and neurodegenerative conditions. His laboratory has made major contributions to identifying genetic causes of ASD, defining the molecular pathology of ASD and allied psychiatric disorders, and has worked to increase diversity in ASD research. His work in dementia is focused on the mechanisms of tauopathies, where his laboratory is developing novel therapeutic approaches.

Dr. Geschwind sits on editorial boards of Cell, Science and Neuron, and is among the highest cited neurologists in the world. He has received several awards for his laboratory’s work including the American Neurological Association (ANA) Derek Denny-Brown Neurological Scholar Award, most recently the Society of Biological Psychiatry Gold Medal Award and the American Academy of Neurology’s 2022 Cotzias Lecture and Award and is an elected Member of the American Association of Physicians and the National Academy of Medicine.

Dr. Daniel Geschwind introduces his talk "An Evolutionary Perspective on Human Cognitive and Behavioral Variation" for "Imagining the Future of Anthropogeny" in November 2022.