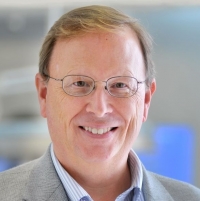 David L. Nelson is Professor of Molecular and Human Genetics, Baylor College of Medicine, Houston, Texas. His background lies in human genetics and the human genome project, with emphasis on mapping and sequencing the human X chromosome. He has participated in the identification of the gene mutated in fragile X syndrome, the first disease described to be caused by abnormal expansion of a simple sequence (trinucleotide CGG) repeat. He also characterized mutations in Lowe syndrome, FRAXE disease and Incontinentia Pigmenti. His laboratory has contributed to understanding the functions of the FMR1 and FMR2 genes using animal models. Relevant to CARTA, Dr. Nelson's group characterized regions of the human genome where chromosomal are found between man and the higher primates. His first graduate student, CARTA member Evan Eichler, began his work to define copy number variation between humans and other apes in the Nelson group. Dr. Nelson's doctoral work was carried out at Massachusetts Insitute of Technolgy under the supervision of Dr. David Housman where they developed early methods for physical mapping of DNA segments in mouse and man. He trained at the NIH and at Baylor as a postdoctoral fellow with Drs. Robert Lazzarini and C. Thomas Caskey, respectively. He has been a member of the faculty at BCM since 1989. He is a fellow of the American Association for the Advancement of Science and a long term member of the American Society of Human Genetics where he has served as Secretary, Editor in Chief of the American Journal of Human Genetics and most recently as President (2018).