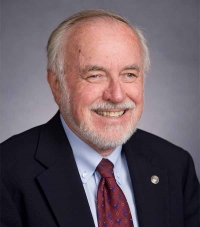 David Woodruff, a world-renowned conservation geneticist and biogeographer who championed UC San Diego’s role in conservation science for 35 years, passed away at his home in Chapel Hill, North Carolina, on December 16, 2015, from complications associated with multiple myeloma. He was 72.

An emeritus professor of biology, Woodruff was the founding chair of the Section of Ecology, Behavior and Evolution in UC San Diego’s Division of Biological Sciences and had recently begun a senior research scientist position at the Nicholas School of the Environment at Duke University. In addition to his research and teaching activities, he served from 2010 to 2014 as director of UC San Diego’s Sustainability Solutions Institute, a campus-wide initiative designed to facilitate interdepartmental research, education and outreach in developing solutions to pressing environmental problems.

Among his scientific colleagues, Woodruff was best known for his development of pioneering techniques of noninvasive genotyping of wild animals based on DNA from shed hair, feathers and feces. He provided the first demonstrations of the method’s power in the context of establishing pedigree relationships, population structure and phylogeographic patterns in chimpanzees, elephants and loggerhead shrikes. These nondestructive DNA sampling methods are now routinely used around the world.

In 2000, he was awarded a Doctor of Science degree from the University of Melbourne in recognition of his body of work in conservation and evolutionary biology.

Woodruff was born in 1943 in Penrith, England, moving with his family to Urbana, Illinois, and then on to Australia. With an ever-changing backyard to discover, he developed keen observational skills and a penchant for collecting reptiles and amphibians. As a teen, he was known to skip school in order to exhibit live specimens at the local natural history museum, and spend his free time combing the Australian bush for new discoveries. One such venture resulted in the rediscovery of the Leadbeater’s possum, thought to be long extinct.

He attended the University of Melbourne, where he received his undergraduate degree in biology and continued on to complete his doctorate there, working on the genetics of a frog hybrid zone, which became a model for future evolutionary biology studies. He won a prestigious Frank Knox Fellowship in 1969 to continue his research at Harvard University, where he worked under famed biologist E.O. Wilson. He then moved to an assistant professorship in biology at Purdue University in 1974 and came to UC San Diego as an associate professor in 1979.

An early adopter of genetic techniques to study problems in systematics, biogeography, evolution and conservation, Woodruff collaborated with his colleague and close friend Stephen Jay Gould on a series of papers using genetic tools to study the evolution of the enormous variation of shell morphologies in Cerion, a group of Caribbean land snails. The study was tragically interrupted by Gould’s death in 2002. Over his career, Woodruff published over 150 papers, several edited volumes and many technical reports. His research interests spanned a broad range of topics including the genetics and coevolution of snail hosts and their parasites that cause schistosomiasis, the evolution of Nautilus species often considered to be “living fossils,” the phylogeography of gibbons and the history of sea level change in Southeast Asia and its effects on patterns of biodiversity.

His conservation interests in Southeast Asia were exemplified by his textbook study of rapid genetic erosion, demographic decline and extinction of populations of small mammals isolated on islands formed by the creation of a dam and reservoir.

Always making his students a priority, he mentored 13 Ph.D. students and 26 master’s degree students, hosted 17 visiting scholars and post-doctoral researchers and served as committee member, research advisor, and independent research faculty mentor for almost 200 graduate and undergraduate students. Even while battling illness during the past year, he continued to assist students as his health allowed.

Woodruff championed the use of scientific methods for wildlife conservation but was also critically aware of the social, political, and cultural milieu in which conservation must take place. His course Conservation and the Human Predicament, co-taught for many years with Shirley Strum, a professor of anthropology at UC San Diego, was regularly cited by students as the most formative classroom experience in their education on campus. Many of his students went on to careers in conservation science.

Woodruff made time for service dedicated to applying evolutionary biology to conservation management. He served on advisory groups for numerous state, national and international science and wildlife conservation agencies. He was a member of American Association for the Advancement of Science, Linnean Society of London, Sigma Xi, Siam Society and several other professional societies and editorial boards. Woodruff also volunteered his expertise to the San Diego Zoological Society, first as a committee member from 1980 to 1998, and then as a trustee until 2014.

In lieu of flowers, his family suggests contributions in memory of David Woodruff go to the Jeanne Messier Memorial Endowed Fund with the Division of Biological Sciences’ Section of Ecology, Behavior and Evolution. Woodruff oversaw this fund while at UC San Diego, which supports graduate student training in field biology. Gifts can be made online here. Please note that your gift is In Memory of Dr. David Woodruff.