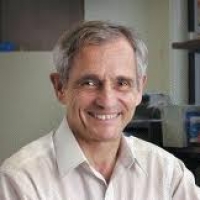 Donald Pfaff is a professor of neurobiology and behavior at The Rockefeller University, in New York. He graduated magna cum laude from Harvard College and received his Ph.D. from MIT. He is a Fellow of the American Academy of Arts and Sciences (elected 1992) and a Member of the National Academy of Sciences (elected 1994). His lab specializes in brain mechanisms underlying social behaviors, with an emphasis on molecular and electrophysiological mechanisms that underlie hormone effects on nerve cells. Pfaff is the author of several books on the brain and behavior. He received the 2005 Award for Excellence in Professional and Scholarly Publishing (medical science category) of the Association of American Publishers for his book, Brain Arousal and Information Theory (Harvard University Press, 2006). He has been the recipient of a National Institutes of Health MERIT Award.