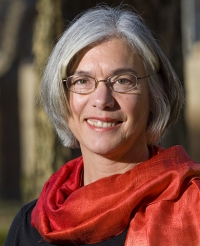 Dorothy Fragaszy is a comparative psychologist and primatologist and Emerita Professor of Psychology at the University of Georgia. She earned her bachelor's degree at Duke University, where she fell in love with primatology when she observed mother and infant lemurs as an undergraduate research assistant. Fragaszy completed her PhD in 1978 at the University of California, Davis. She studies primates' behavior from ethological, ecological, psychological, and biomechanical perspectives.  She focuses on behavioral development, learning, problem-solving, perceptual and motor skills, manual dexterity, social influences on learning, and technical traditions. For most of Fragaszy's career, she studied these topics primarily with captive capuchin monkeys and occasionally with captive chimpanzees and humans. Since 2005, she and her collaborators in the EthoCebus project (http://www.ip.usp.br/ethocebus/) have studied wild bearded capuchin monkeys in the Cerrado of Brazil. These monkeys use stone hammers to crack palm nuts and other hard, encased food items.  They use stones that can weigh more than they weigh themselves, transporting them to anvils and standing bipedally to use them as hammers. Fragaszy works with collaborators from anthropology, archaeology, biology, geography and kinesiology to understand these monkeys and their unusual technical skills from as broad a perspective as possible. She has served in several elected offices of the International Primatological Society including President and Secretary General and as President of the American Society of Primatologists. She is a Fellow of the American Association for the Advancement of Science and of the Association of Psychological Science and currently serves as Editor in Chief of the Journal of Comparative Psychology, published by the American Psychological Association.