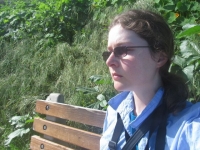 Emily Davis is a graduate student in linguistics and advisee of Robert Kluender who also works in the Gentner Lab, and has worked with Kenny Smith at the University of Edinburgh.  She is interested in the cognitive basis of linguistic recursion: the process by which one sentence can be nested within another. Where does recursion in languages come from? How does linguistic recursive structure relate to other cognitive abilities, such as task planning and tool use? Why does center-embedding persist in language despite its processing difficulties? Evidence from animal and human cognitive experiments suggests that recursion may not be specifically linguistic, or specifically human. She investigates these phenomena through two approaches: iterated learning (by humans) of both artificial language and nonlinguistic symbol sequences, and artificial grammar learning by European Starlings. In her spare time, she likes to watch and photograph local birds.