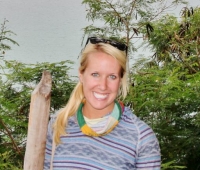 Emily Little is a graduate student in psychology at UC San Diego studying cultural variation in parent-infant interaction and the related implications for early social and cognitive development. Advanced social cognition and communication skills are often highlighted as human-specific, universal acquisitions, and we emphasize the ability of human infants to display a sense of self awareness, be sensitive to the emotions of others, share attention and engage in cooperative play, and make inferences about novel situations and internal states of others. Although the general importance of early social input is recognized, very little is known about how cultural variation in such input affects the trajectory of infant development. In remote cultures, early patterns of communication with infants are often quite distinct from those assumed in Western developmental psychology. Emily’s research employs ethnographic and observational methods to investigate culture-specific infant-caregiver interaction patterns, which she combines with structured observation and experimental paradigms to measure differences in the development of social cognition skills in infancy. Emily has conducted fieldwork in Vanuatu, and recently collected data in Bolivia.