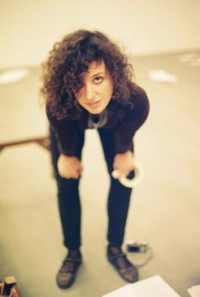 Emily Verla Bovino is a doctoral candidate in the Visual Arts department at UC San Diego.  Emily is an artist, writer, urbanist, and art historian whose projects often circulate under the anagrams Mobile Irony Valve, Nimble Love Ivory and Inviolably Remove. She earned her undergraduate degree from Barnard College, Columbia University in urban studies, with a concentration in political science and anthropology in 2002; she received a master's degree in Art History, Theory and Criticism from UCSD in 2013 with a thesis on the work of French humorist Alphonse Allais. She has published writing with several international art publications. She has taught university seminars on the use of writing by contemporary artists (Istituto Universitario di Architettura di Venezia (IUAV)) and a survey course introducing key topics in Contemporary Urban Planning and Tactical Urbanisms (UCSD).  At UC San Diego, she has continued her research in performance studies with a focus on the feedback between art practice and art history.  She is part of the Arts Culture Knowledge Research Group at the UC San Diego African and African American Studies Research Center, and organized to formalize the collaboration between the Visual Arts department and CARTA.  Emily has presented scenographic environments and performative lectures in Turin, Milan, Rome, Bern, Mexico City, Prague, San Francisco, San Diego and Marfa, Texas. She has been invited for artist-residencies at Futura in Prague, Viafarini in Milan, the Fondazione Spinola-Banna in Turin, Fieldwork: Marfa in Marfa, Texas and SOMA in Mexico City. In 2012, she was nominated to participate in the SommerAkademie at the Zentrum Paul Klee, and in 2012 and 2013, received grants in performance practice and research from the University of California Institute for Research in the Arts (UCIRA).

Emily is currently completing her dissertation in Art HIstory, Theory and Criticism (concentration in Art Practice) on the concept of the "plastic". Regarding the relevance of her doctoral research in art history, theory and criticism, and art practice, to anthropogeny, she has been exploring resonances and dissonances between the "plastic", as it is understood in genetics, evolutionary biology, the neurosciences and cognitive science, and the concept of the "plastic" as it has been used in art history, artist writings and philosophy: she is interested in the way these resonances and dissonances, when considered together, can contribute to addressing what, across fields, is acknowledged as the undertheorized role of the body in the symbolic. She is interested in thinking about how changing ideas about interactions among language, gesture and memory, inform representations of human, non-human and inhuman identities. She is interested in the way narratives of anthropogenesis (anthropos=human; genesis=becoming) change in relation to parts of bodies privileged for conservation as specimens, parts of bodies that survive in afterlife as fossils, and objects that acquire the identity of artifact, art and tool. As part of her broader dissertation project, she studies this through art practice by creating durational sculpture, experimental literature, improvisational techniques, movement-research and sound environments, which when combined, generate episodes of RK-LOG, a co-operatively scripted plastic poem about a fictional human specimen in what others have contributed to naming the "para-euchronic" near future.