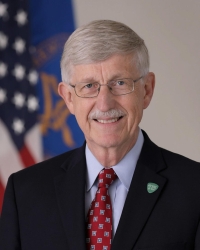 Francis S. Collins, M.D., Ph.D. is currently Director of the National Institutes of Health (NIH) and was the former director of the National Human Genome Research Institute (NHGRI).  He led the successful effort to complete Human Genome Project (HGP), a complex multidisciplinary scientific enterprise directed at mapping and sequencing all of the human DNA, and determining aspects of its function. A working draft of the human genome sequence was announced in June of 2000, an initial analysis was published in February of 2001, and a high-quality, reference sequence was completed in April 2003.

From the outset, the HGP ran ahead of schedule and under budget, and all the data is now available to the scientific community without restrictions on access or use. Building on the foundation laid by the HGP, Dr. Collins lead NHGRI's effort to ensure that this new trove of sequence data is translated into tools and strategies to advance biological knowledge and improve human health.

Dr. Collins received a B.S. from the University of Virginia, a Ph.D. in Physical Chemistry from Yale University, and an M.D. from the University of North Carolina. Following a fellowship in Human Genetics at Yale, he joined the faculty at the University of Michigan, where he remained until moving to NIH in 1993. His research has led to the identification of genetic variants associated with type 2 diabetes and the genes responsible for cystic fibrosis, neurofibromatosis, Huntington's disease and Hutchinson-Gilford progeria syndrome. He is a member of the Institute of Medicine and the National Academy of Sciences.

On Nov. 5, 2007, Collins received the Presidential Medal of Freedom, the nation's highest civil award, for his revolutionary contributions to genetic research.