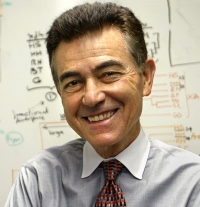 Francisco J. Ayala is “University Professor” and Donald Bren Professor of Biological Sciences at the University of California, Irvine. On 12 June 2002, President George W. Bush awarded him the National Medal of Science at the White House. From 1994 to 2001, Ayala was a member of President Clinton's Committee of Advisors on Science and Technology. He has been President and Chairman of the Board of the American Association for the Advancement of Science (1993-1996), and President of Sigma Xi, The Scientific Research Society of the U.S (2004-2005). Dr. Ayala is a member of the U.S. National Academy of Sciences, the American Academy of Arts and Sciences, the American Philosophical Society and numerous foreign academies, and has received numerous prizes and 24 honorary degrees from universities in 10 different countries. He has published more than 1200 articles and is author or editor of 60 books. Dr. Ayala has made significant and wide-ranging experimental and theoretical contributions to evolution theory. His scientific research focuses on population and evolutionary genetics, including the origin of species, genetic diversity of populations, the origin of malaria, the population structure of parasitic protozoa, and the molecular clock of evolution. He also writes about the interface between religion and science, and on philosophical issues concerning epistemology, ethics, education, and the philosophy of biology. He was a chief witness in the creationist trials in Arkansas in 1981 that prevented religion from being taught as science in the classroom. Dr. Ayala has been called the “Renaissance Man of Evolutionary Biology” by The New York Times. In May, 2010, Professor Ayala received the Templeton Prize from H.R.H. Prince Philip, the Duke of Edinburgh, in Buckingham Palace.