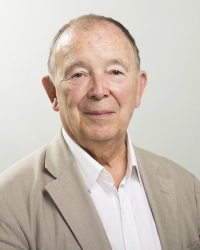 Jean-Pierre Changeux is Honorary Professor at the Collège de France & Pasteur Institute Paris and International Faculty, Kavli Institute for Brain & Mind, University of California San Diego. At the advent of the era of molecular biology, Jean-Pierre Changeux pioneered the study of the role of conformational changes linking topographically distinct sites in regulatory processes. His PhD studies, carried under the supervision of Jacques Monod, provided the experimental and conceptual bases for the formal model of allosteric interactions in regulatory proteins, subsequently put forward in a joint paper that had become one of the most quoted papers of the scientific literature. Throughout a long career, Changeux has consistently built upon and extended his early theory, to spawn many new and flourishing fields of investigation.

His main contributions and discoveries in the course of the past 50 years are centered on the general theme of receptors and their allosteric transitions, primarily in the nervous system and were initiated by the first identification of a neurotransmitter receptor: the nicotinic acetylcholine receptor. He combined approaches from supposedly disparate disciplines of pharmacology, molecular biology and developmental biology as well as behavioural and pathological studies, as and when required, to demonstrate that the nicotinic receptor is a bona fide allosteric protein. He further elucidated the molecular mechanism through which drugs modulate receptor efficacy when binding to distinct allosteric sites thereby opening a revolutionary new avenue in the field of drug discovery.

His contributions to understanding the regulation of acetylcholine receptors in turn contributed to advancing our understanding of the nature of long-term synaptic plasticity within neural networks and on the neural bases of cognitive functions up to conscious processing. The consequences for human pathology are immense: from the understanding of drug addiction to the therapeutics of neuropsychiatric diseases.

The publication of his book Neuronal Man: The Biology of The Mind in 1985 brought Changeux celebrity status among the wider public. Since then he has authored or co-authored several other books notably, Conversations on Mind Matter and Mathematics with the mathematician Alain Connes (1998), What Makes Us Think with the philosopher Paul Ricoeur (2002), Physiology of truth (2005),The Enchanted Neurons with the composers P.Boulez and P.Manoury (2019) which initiated an instructive dialogue between neuroscience and other disciplines.

Jean-Pierre Changeux’s academic accolades include the Gairdner foundation award in 1978, the Wolf prize in 1983, the Louis Jeantet Prize for Medicine in 1993, the Balzan Prize in 2001, the National Academy of Sciences Award in Neurosciences USA in 2007, the Olav Thon international research award in biomedicine, Oslo, Norway, 2016, the Albert Einstein World Award of Science, Hong Kong, 2018.