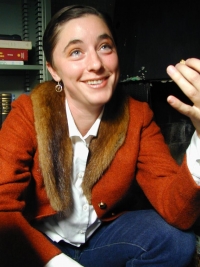 Katie Hinde is an Associate Professor in the School of Human Evolution and Social Change, Center for Evolution and Medicine, at Arizona State University. As Director of the Comparative Lactation Lab, she investigates the adaptively relevant environment of the developing mammalian infant- the mother and her milk- to understand early life metabolic, immunological, and biobehavioral organization. She has established descriptive and explanatory mechanisms of milk synthesis in the rhesus macaque, the primary non-human biomedical model, and demonstrated how maternal life history, infant sex, and cultural ecology influence milk. She earned a B.A. in anthropology from the University of Washington in 1999 and a Ph.D. in Anthropology from UCLA in 2008. From 2009-2011, she trained as a post-doc in neuroscience at the California National Primate Research Center, UC Davis and began her faculty career as an Assistant Professor in Human Evolutionary Biology, Harvard University 2011-2015. In addition to her scholarly publications, Hinde co-edited “Building Babies: Primate Developmental Trajectories in Proximate and Ultimate Perspective” released by Springer in 2013, is an associate editor and writer for SPLASH! Milk Science Update, and serves on the executive council for the International Society for Research in Human Milk and Lactation. She showcases research on mother’s milk, breastfeeding, and lactation for the general public, clinicians, and researchers at her blog “Mammals Suck… Milk!”