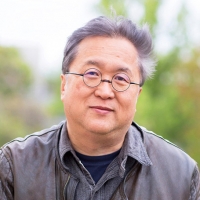 Kazuo Okanoya is a professor of biopsychology and team leader of the Cognition and Behavior Joint Research Laboratory at The University of Tokyo.  Dr. Okanoya was born in Japan in 1959 and studied animal psychology at Keio University, Japan. Okanoya obtained a PhD from the University of Maryland, USA in 1989, and in 1994, he became an associate professor at Chiba University, Japan, where he established a laboratory specializing in the study of animal communication. In 2004, Okanoya moved to the Riken Brain Science Institute and extended his area of research to include human language and emotion. In 2010, he moved to The University of Tokyo where he currently keeps his laboratory in biopsychology.