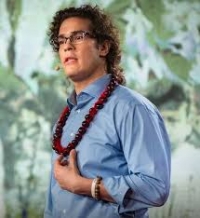 Keolu Fox earned his doctorate in Genome Sciences in 2016 at the University of Washington, Seattle. He then went on to serve as a postdoctoral fellow at UC San Diego since 2016, during which he was awarded the NIH, Institutional Research and Academic Career Development Award (2017) and the UC Chancellors’ Postdoctoral Fellowship (2018). Fox’s research program is multi-disciplinary in nature, reflecting his interdisciplinary research experience in anthropology, genomics, and computer science. His primary research focuses on questions of functionalizing genomics, which involves putting to the test theories of natural selection by editing genes and determining the function of the mutations. This unique approach of hypothesis testing through gene editing allows him to examine and test effects of genetic variants assumed to be under natural selection, such as “thrifty genes” in Polynesians, or Neanderthal variants in human cell lines. Fox is using the latest gene editing (CRISPR) technologies to ask anthropological questions about natural selection in humans and other closely related species that have never before been testable. Based on this work, he has been granted prestigious awards from Anthropological institutions including American Association for Physical Anthropology (Cobb Professional Development Grant) 2018 and the National Geographic Emerging Explorer (selected as one of fourteen ‘world-changers’). His work has implications for understandings fundamental biological processes and diseases, and for these as they affect social groups. Fox connects biological anthropology with other subfields to address the relationship of genomics to society, the relationship of indigenous communities to science, questions of human health from a holistic biocultural perspective, and paleogenetics as a complement to archeological science.