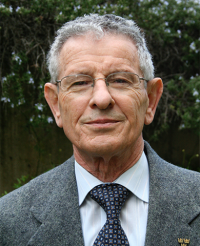 Marcus Feldman, Ph.D., is the Wohlford Professor of Biology at Stanford University and External Professor at the Santa Fe Institute. He directs the Morrison Institute for Population and Resource Studies and is co-director of Stanford’s Center for Computational, Evolutionary and Human Genomics. Feldman’s specific areas of research include the evolution of complex genetic systems that can undergo both natural selection and recombination, the evolution of modern humans using models for the dynamics of molecular polymorphisms, especially DNA variants, cultural evolution, and the evolution of learning as one interface between modern methods in artificial intelligence and models of biological processes, including communication. He is the author of more than 600 scientific papers and ten books on evolution, ecology, mathematical biology, and demography.  He is a member of the U.S. National Academy of Sciences, the American Academy of Arts and Sciences, and the American Philosophical Society. He was the 2011 Dan David laureate in Evolution and was awarded the 2016 Kimura Prize in Evolution by the Japanese Suzuki Foundation.