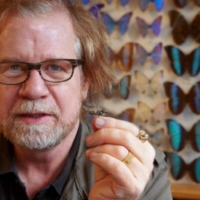 Mark W. Moffett is a biologist who has spent the last several years studying the organization of societies in humans and other animals while on sabbatical at the National Evolutionary Synthesis Center in Durham and as a visiting scholar at the Department of Human Evolutionary Biology at Harvard. Moffett completed his doctorate at that institution on the evolution and social organization of an ant species with army ant behaviors under the ecologist Edward O. Wilson and is currently Research Associate in Entomology at the National Museum of Natural History. Before that he held a research position at the Museum of Vertebrate Zoology at University of California at Berkeley and spent two years as an assistant curator in charge of the ant collection at Harvard’s Museum of Comparative Zoology. His work in over 100 countries has resulted not only in academic publications but achievements in public outreach that have included major museum exhibits and books such as The Human Swarm: How Our Societies Arise, Thrive, and Fall (Basic Books, 2019). Moffett is currently studying the stability of enduring social groups (societies) across the vertebrate animals with three years of funding from the John Templeton Foundation.