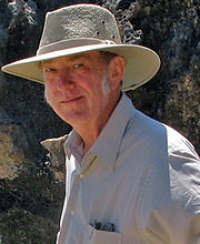 Matt Cartmill joined Boston University’s Anthropology Department as a professor and director of graduate studies in 2008. He has published more than a hundred scholarly and popular works on the evolution of people and other animals and on the history and philosophy of evolutionary biology. Well known for his revolutionary analyses of the origins and early evolution of the ancestral primates, he has also made innovative contributions to scientific thinking about the origins and relationships of higher primates, prosimian anatomy, early hominin adaptations, quadrupedal locomotion, cranial evolution, and the philosophy of science. Dr. Cartmill’s award-winning 1993 book, A View to a Death in the Morning, is a witty and thoughtful dissection of the cultural assumptions behind the hunting hypothesis in human evolution. He is the co-author (with F. H. Smith) and illustrator of The Human Lineage, a comprehensive new (2009) survey of human evolution. The recipient of numerous awards for his research, writing, and teaching, Dr. Cartmill is a Guggenheim and AAAS Fellow, a former president of the American Association of Physical Anthropologists, a founding co-editor of the International Journal of Primatology, and the former editor-in-chief of the American Journal of Physical Anthropology.