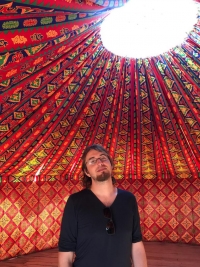 Matthew Zaslansky is a Ph.D student in Linguistics at UC San Diego who investigates the (in)stability of redundant subsystems in languages at the individual and population levels. Language exhibits the complex coexistence of a tendency towards efficiency and economy on one hand, and variable amounts of stable redundancy (e.g. synonymy) on the other hand. Matthew’s earlier research has focused on synonymy and morphological variation in American Sign Language (ASL) and Azerbaijani. The question driving this line of inquiry is this: Given that synonyms are rare or simply unknown in animal communication systems, what unique properties of human language allow redundant variants to be maintained across generations? There is some evidence which suggests that redundant grammatical systems emerge from and are maintained by basic evolutionary principles. Matthew uses a variety of methods to investigate these principles across languages, including large databases of corpora, experiments, and fieldwork on underdescribed spoken and signed languages in the Caucasus—particularly in Azerbaijan and Russia—in which languages have developed diverse kinds of complex word-structure. He is also interested in using evolutionary models of equilibrium and phylogenetic approaches to better understand the persistence of synonymous grammatical patterns in language generally.