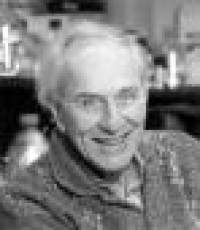 Morris Goodman, Ph.D., was distinguished professor of Anatomy and Cell Biology at Wayne State University School of Medicine family. He died on Nov. 14, 2010 at the age of 86.

Dr. Goodman, also a professor in the Center for Molecular Medicine and Genetics, is known worldwide for his research in molecular evolution and molecular systematics. His original and innovative research created the foundations for molecular phylogenetics, an entirely new and important scientific field that employs protein and DNA sequences to decipher the course of evolution of humans and other species. In becoming a leading scientist pursuing molecular studies of evolution, Dr. Goodman set forth seminal ideas about the processes and patterns of molecular evolution.

In 1962, Dr. Goodman’s assertion that chimpanzees and gorillas are genetically more closely related to humans than to other apes, and thus should be placed in family Hominidae rather than Pongidae, sparked debate. However, his research based on molecular evidence has since been generally accepted, including a later discovery from DNA sequences that chimpanzees and humans are more closely related to each other than either is to gorillas or other apes.
The Morris Goodman, Ph.D., and Selma Goodman Endowed Chair in Molecular Anthropology was established in June 2008 to recognize faculty scholarly achievement and to support interdisciplinary research in phylogenomics, the science of determining the function of a gene based on its evolutionary history, and tracing a species' evolution by combining the information from genes or entire genomes. The chair supports the furtherance of research and the advancement of knowledge in the evolution of humans and other mammals.

Dr. Goodman was a member of numerous professional societies, published hundreds of articles, gave plenary lectures at international congresses and was the founder and editor-in-chief of the journal Molecular Phylogenetics and Evolution. In 1996 he received the prestigious honor of being elected a Fellow in the American Academy of Arts and Sciences. In 2002, Dr. Goodman received the Charles R. Darwin Award for Lifetime Achievement from the American Association of Physical Anthropologists and was elected to the National Academy of Sciences.