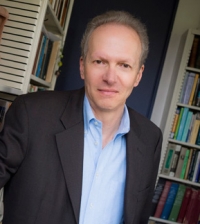 Ralph Greenspan is an associate director of the Kavli Institute for Brain and Mind at UC San Diego. Dr. Greenspan began working on the genetic and neurobiological basis of behavior in the fruit fly (Drosophila melanogaster) as a graduate student with one of the field’s founders, Jeffery Hall, at Brandeis University. His work has ranged from the genetic control of nervous system development in the fruit fly and mouse, to genetic, molecular and neurobiological studies of innate and learned behaviors in the fruit fly. In the course of this work, he has pioneered several new approaches in the fruit fly that have had important implications for mammalian neurobiology, including: the demonstration that the fruit fly has a sleep-like behavior similar to that of mammals, studies of physiological and behavioral consequences of mutations in a neurotransmitter system affecting one of the brain's principal chemical signals, studies making highly localized genetic alterations in the nervous system to alter behavior, and molecular identification of genes causing naturally occurring variation in behavior. One of his main interests currently is to understand the role of network level activity in the nervous system and among the genes, motivated by a strong belief that the state of these networks is of major importance in determining behavior.