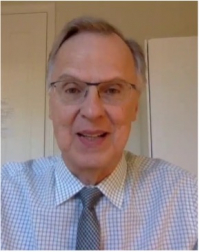 Robert Kluender is a Professor of Linguistics at UC San Diego and serves on the CARTA Internal Advisory Board. He has been a member of CARTA since the mid-1990s, and has co-organized two CARTA symposia during that time: one on language evolution, and the other on domestication and human self-domestication. He also serves on the advisory board of the Center for Research in Language at UC San Diego. The underlying question addressed in his research is the extent to which the natural limitations of human cognition shape and constrain the human language system: how much of linguistic competence can be reduced to facts of performance, and how language is represented and processed in the brain. The Language and Brain Laboratory addresses these questions in experimental studies of language processing focused on the interaction of language structure, working memory, semantics and pragmatics, particularly as it unfolds in real time. Kluender also has long-standing interests in the origins of apparent linguistic constraints, the evolutionary foundations of language, and the intersection of language, consciousness, and the physical world.