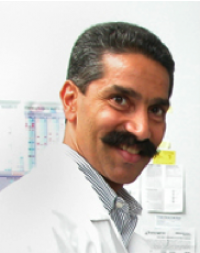 Dr. Sangram Sisodia is currently the Thomas Reynolds Sr. Family Professor of Neuroscience and Director of the Center for Molecular Neurobiology in the Department of Neurobiology at the University of Chicago. His research has focused on understanding the cellular and molecular biology of the amyloid precursor protein (APP) and presenilins (PS1 and PS2) that are mutated in pedigrees with familial Alzheimer's Disease (FAD). He was the first to define the biosynthesis, processing and trafficking of APP in mammalian cells in vitro, and with Ed Koo and Don Price, established that neuronal APP is rapidly transported and processed at terminals (synapses) in the central nervous system where pathogenic Aβ peptides are deposited, leading to impairments in synaptic physiology and function, the latter studies performed with his long-term collaborator, Dr. Roberto Malinow. Dr. Sisodia pioneering studies on the generation of PS1-null mice revealed, for the first time, that loss of PS activity was linked to defects in Notch signaling as a result of reduced intramembranous "γ-secretase" activity. In parallel, he demonstrated that levels of PS1 are highly regulated by limiting cellular factors and his group has provided critical information regarding the assembly, subunit interactions and enzymatic mechanism(s) of the γ-secretase complex in the processing of a variety of substrates, including: APP; Notch; the Notch ligands, Delta and Jagged; and the axonal guidance receptor, DCC. Finally, and culminating sixteen years of work in the field, Dr. Sisodia and his long-term collaborator Yue-Ming Li at Sloan-Kettering have offered unambiguous proof that PS1 is the catalytic center of g-secretase. In addition to these seminal contributions to elucidating in the molecular biology of APP and presenilins, Dr. Sisodia has made invaluable contributions to understanding the neurobiological mechanisms of Alzheimer’s disease. His group was amongst the first to develop and characterize mice expressing FAD-linked variants of PS1 and APP that exhibit Ab deposits and memory deficits. These models have been invaluable for understanding neuronal vulnerability, and the impact of environmental enrichment and exercise in modulating Aβ deposition and adult neurogenesis. Dr. Sisodia has published 156 peer-reviewed manuscripts, and for his contributions, he has received several awards, including: the Potamkin Prize for Alzheimer's Disease Research from the American Academy of Neurology (1997) and the Metropolitan Life Foundation Award for Medical Research (1998). He has delivered a number of important lectures, including: Presidential Special Lecturer at the Annual Society for Neuroscience Meeting in 2001 and 2006; Keynote lecture at The Keystone Symposia on Alzheimer’s Disease (2006); Founders Day Lecture, Indian Academy of Sciences (2007); NIA Distinguished Lecture (2008); and Keynote Speaker, EMBO Proteolysis and Neurodegeneration (2010). He was inducted as a member of the Johns Hopkins Society of Scholars (2007), Fellow of AAAS (2008), and Foreign Fellow, National Academy of Sciences, India (2010). Dr. Sisodia has served on the scientific review and advisory committees of the federal and non-federal agencies, including: NLS1 (NIH) Study Section ('95-'97); Member, NIA Board of Scientific Counselors ('99-'04); and The Society for Neuroscience (SFN) Program Committee (2007-2009). He has also organized, or co-organized several Adler Symposia on Alzheimer’s Disease at the Salk Institute, two Keystone Symposia, and was the co-director of the Cold Spring Harbor Neurobiology of Disease course ('97,'98). He has served on the Editorial Boards of eight journals, including Neuron and Cell (10 year term expired in 2009), and is a member of the Dana Alliance for Brain Initiatives.