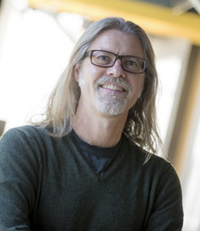 Sheldon Brown combines computer science research with vanguard cultural production. He is the John D. and Catherine T. MacArthur Foundation Endowed Chair of Digital Media and Learning at UCSD, and is the Director of the Arthur C. Clarke Center for Human Imagination where he is a Professor of Visual Arts and a co-founder of the California Institute of Telecommunications and Information Technologies (Calit2) and he is also the UCSD Site Director of the NSF supported Industry-University Collaborative Research Center for Hybrid Multicore Productivity Research (CHMPR). His interactive artworks have been exhibited at: The Museum of Contemporary Art in Shanghai, The Exploratorium in San Francisco, Ars Electronica in Linz Austria, The Kitchen in NYC, Zacheta Gallery in Warsaw, Centro Nacional in Mexico City, Oi Futuro in Rio de Janeiro, Museum of Contemporary Art San Diego, and others. He has also been featured at leading edge techno-culture conferences such as Supercomputing, SIGGRAPH, TedX, GDC. He has been commissioned for public artworks in Seattle, San Francisco, San Diego and Mexico City, and has received grants from the NSF, AT&T New Experiments in Art and Technology, the NEA, IBM, Intel, Sun Microsystems, SEGA SAMMY, Sony, Vicon and others.