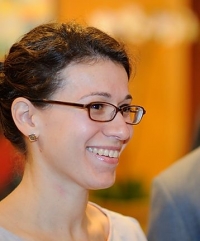 Yana Kamberov joined the Departments of Genetics and Dermatology at the University of Pennsylvania Perelman School of Medicine in 2016. Her lab's research focuses on the genetic mechanisms governing the development and evolution of the skin and its appendages, with a special focus on the genetic basis for the evolution of thermoregulatory skin traits of humans. Yana is a graduate of the University of Pennsylvania from which she received her Bachelor's degree in Biology and Anthropology. She received her Ph.D. in Cell and Developmental Biology from Harvard University. Upon completing her doctorate Yana trained as a post-doc in the lab of Cliff Tabin in the Genetics Department of Harvard Medical School under the co-mentorship of Pardis Sabeti (Harvard University, HHMI), Daniel Lieberman (Harvard University) and Bruce Morgan (Harvard Medical School and MGH).