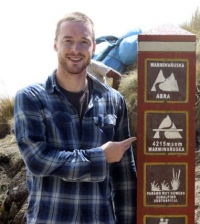 Andrew Schork is a graduate student in cognitive science at UC San Diego. Andrew is interested in the origins of cognition across many scales, be they evolutionary or developmental.  As an undergraduate, he studied anthropology, focusing on human evolution and evolutionary psychology, and applied mathematics.  During this time, Andrew developed a deep philosophical interest in understanding where thoughts come from, focusing on how evolution shaped humans to support our very unique cognitive abilities.  Now, as a graduate student in cognitive science, his research is focused on mapping natural genetic variation in humans to variability if brain structure, cognitive abilities and risk for psychiatric conditions.  His goals are to frame this research in a developmental context, uncovering genetic factors that contribute to variability in the course of brain and cognitive development across childhood and adolescence.  He has both theoretical aims, trying to characterize the properties of genetic variants underlying brain and cognitive development, and more applied aims, focusing on the development and implementation of novel statistical approaches aimed at linking genes and trait variability.