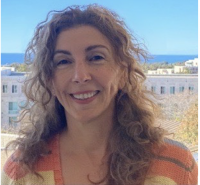 Katerina Semendeferi is Professor of Anthropology and Director of the Laboratory for Human Comparative Neuroanatomy at UC San Diego. She became a member of CARTA (then LOH) in 1998, soon after joining the faculty at UC San Diego, and later was asked to join the CARTA advisory board, before becoming a CARTA Co-Director in July 2022. Semendeferi is also Co-Director of the Archealization Center and advisory board member of Kavli Institute for Brain and Mind at UC San Diego. In 2012 Semendeferi was Elected Fellow of the American Association for the Advancement of Science (AAAS).

Beginning during her time in graduate school at the University of Iowa, Semendeferi undertook two major initiatives in the field of human brain evolution. One initiative involved establishing collaborations with zoos across the U.S. aimed to make available to science the brains of apes, following their natural death. The other initiative involved the novel application of structural Magnetic Resonance Imaging technology on the collected postmortem brain specimens, followed by a postdoctoral NIH fellowship in 1995 to begin scanning, in collaboration with the Yerkes Primate Research Center, the brain of living apes. These early initiatives provided comparative material and opportunities for many students of human and ape neuroanatomy and planted the seeds for the establishment of primate brain banks and the subsequent larger scale application of non-invasive imaging techniques on living apes in this country.

Semendeferi’s studies of the fronto-limbic circuitry showed that the relative size of the frontal cortex is remarkably similar across apes and humans and that evolutionary changes are found is some, but not all, regions of the human frontal lobe and amygdala. Her laboratory explores links between the phylogenetically reorganized brain regions and their implication in vulnerabilities observed in atypical human neurodevelopment (Autism and Williams Syndrome). Semendeferi has been involved with other approaches to the study of human evolution, including the fossil record, and participated in archeological and paleoanthropological excavations in the United States, Europe and Asia. She maintains an interest in bringing together multiple fields of inquiry including efforts to bridge classical quantitative neuroanatomy with the field of induced pluripotent stem cells and brain organoids.