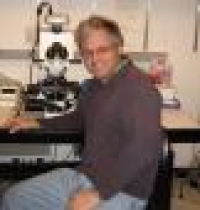 Our research is directed towards the study of selective neuronal vulnerability in dementing illnesses using classical neuropathological as well as modern quantitative immunohistochemical methods. We intend to develop a quantitative, detailed and cohesive definition of neuronal susceptibility to degeneration in the cerebral cortex, by extending data on Alzheimer disease to other dementing disorders as well as animal models of age-related illnesses, and by defining the key neurochemical and morphological characteristics linked to relative vulnerability (or resistance to degeneration) of identified neuronal populations. The regional and laminar distribution in the cerebral cortex of specific neuronal populations is investigated in a variety of neurodegenerative disorders, and quantitatively compared to Alzheimer disease and control brains. In addition, a detailed study of brains from aged patients with no records of neurological and psychiatric disorders is performed in order to define further the limits of normal aging in the brain.

We also investigate transgenic mouse models, expressing the human tau gene or mutations in the amyloid precursor protein. We study spatial and temporal relationships between neuronal integrity and reflections of degeneration such as tangle formation, amyloid deposition and microvascular damage. We employ high field magnetic resonance microscopy, stereologic, and mathematical modeling approaches to develop an accurate quantitative appraisal of such pathological changes in a region- and layer-specific manner. Neuronal morphology is assessed in a quantitative manner using intracellular injection of hippocampal and neocortical neurons coupled with computerized reconstruction to assess the degree to which the accumulation of pathologic markers causes dendritic atrophy and spine loss in different subtypes of neocortical pyramidal cells.

Such correlations of quantitative anatomical analyses and clinical data will be valuable to determine the causes and mechanisms of dementia and aging-related pathologies of the central nervous system. Altogether our research efforts will provide a quantitative assessment, in dementia cases of different severity and in relevant animal models, of the relative contribution of age-related vascular alterations, neuritic pathology and amyloid deposition to the progressive demise of selectively vulnerable neuronal subsets subserving cortical circuits critical for memory and cognition. The characterization of such vulnerable neurons and circuits is fundamental to the design of therapeutic strategies aiming at their protection or rescue. Similar approaches are applied in the context of schizophrenia and autism spectrum disorder.

Finally we are investigating mammalian brain evolution with a focus on cetaceans and great apes. These studies have led us to identify specific neuronal types in parts of the cerebral cortex known to be involved in social awareness, judgement, and attention, that can be considered as markers of adaptive mechanisms and functions in response to particular ecological pressure. We are also investigating the patterns of brain aging in great apes using a quantitative neuropathological approach in comparison to the studies of the aging human brain described above.