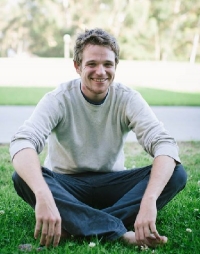 Stephen Johnston is a graduate student in neuroscience at UC San Diego.  He is interested in knowing how we differentiate similar events from each other while at other times make disparate events seem familiar. In one case, your brain may tell you, despite obvious differences, you've experienced something before, as in deja vu. In another case, despite the repetitivity of an event, like daily parking your car, your brain can very efficiently segregate the event as a new memory. This recognition, segregation, and memory formation happens in a brain structure known as the hippocampus.  Stephen works in the lab of Fred Gage, investigating the cellular and systems level activity of neurons in the hippocampus, which give rise to these functions. As a physicist-cum-neuroscientist (ie a reluctant biologist), he is interested in the fundamental principles which govern the construction of the brain and how computationally relevant activity emerges from ensembles of individual neurons. The hippocampus is unique in that it is one of only two regions in the mammalian brain that continues to produce new neurons throughout adulthood. He uses this system to gain deeper insight into how networks of neurons integrate new members and how this alters computation within the hippocampal circuit.

Photo thanks to a student's project: https://www.facebook.com/portraitsofucsd