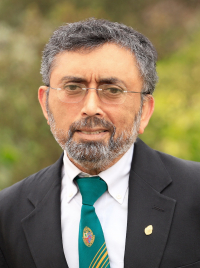 Ajit Varki is Distinguished Professor of Medicine and Cellular & Molecular Medicine, Founding Co-Director of CARTA, Founding Director of the Glycobiology Research and Training Center (GRTC) at UC San Diego, and Adjunct Professor at the Salk Institute. He received basic training in physiology, medicine, biology, and biochemistry at the Christian Medical College, Vellore, The University of Nebraska, and Washington University in St. Louis. He also has formal training and board certification in internal medicine, hematology, and oncology. Dr. Varki is Executive Editor of Essentials of Glycobiology (Cold Spring Harbor Press) and is recipient of a MERIT award from the NIH, and an American Cancer Society Faculty Research Award. Honorific elections include the American Academy of Arts and Sciences, the National Academy of Medicine, the American Society for Clinical Investigation, and the Association of American Physicians. He is also recipient of the three highest honors in his field, the Karl Meyer Award of the Society for Glycobiology, the International Glycoconjugate Organization Award and the Rosalind Kornfeld Award for Lifetime Achievement in Glycobiology. He is recognized for creating the first major open access research journal (J. Clin. Invest., 1996) as well as the first major open access textbook (Essentials of Glycobiology, 2009). He was honored with the Old Cottonian of Eminence Award at the 150th Anniversary of Bishop Cotton Boys School, Bangalore, India, (2015) as well as a Distinguished Faculty Medal and Oration at his medical school alma mater, CMC, Vellore. Significant past appointments include: co-head, UC San Diego Division of Hematology-Oncology; President of the Society for Glycobiology; Editor-in-chief of the Journal of Clinical Investigation; Interim director of the UC San Diego Cancer Center, President of the American Society for Clinical Investigation, and UC San Diego Associate Dean for Physician-Scientist Training. Dr. Varki's research interests are focused on a family of cell surface sugars called sialic acids, and their roles in biology, evolution and disease. Currently active projects are relevant to the roles of sialic acids in microbial infectivity, the regulation of the immune response, the progression and spread of tumors, aging, and unique aspects of human evolution. His group is particularly intrigued to find multiple interrelated differences in sialic acid biology between humans and our closest evolutionary cousins, the "great apes". These differences are a signature of the events that occurred during the last few million years of human evolution, and appear to be relevant to understanding several aspects of the current human condition, both in health and disease. Dr. Varki’s book, Denial (Twelve, Hachette Books 2013), explores a novel "Mind Over Reality Transition (MORT) theory that denying reality and personal mortality was a key step in allowing the emergence of a full theory of mind, and in the origin of our species.