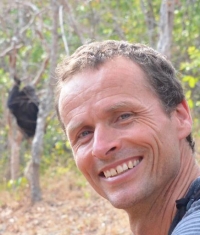 Pascal Gagneux is Professor of Pathology and Anthropology at UC San Diego. He is interested in the evolutionary mechanisms responsible for generating and maintaining primate molecular diversity. The Gagneux laboratory studies cell-surface molecules in closely related primates species. His focus is on glycans, the oligosaccharides attached to glycolipids and glycoproteins of the surfaces of every cell and also secreted into the extra-cellular matrix. His laboratory is exploring the roles of molecular diversity in protecting populations from pathogens as well as potential consequences for reproductive compatibility. Dr. Gagneux’s interest is in how glycan evolution is shaped by constraints from endogenous biochemistry and exogenous, pathogen-mediated natural selection, but could also have consequences for sexual selection. Dr. Gagneux has studied the behavioral ecology of wild chimpanzees in the Taï Forest, Ivory Coast, population genetics of West African chimpanzees, and differences in sialic acid biology between humans and great apes with special consideration of their differing pathogen regimes. In 2011, Gagneux helped establish a graduate specialization in Anthropogeny. The specialization is offered through eight participating graduate programs in the social and natural sciences at UC San Diego.

Dr. Gagneux talks about his work before chairing the "Comparative Anthropogeny: Exploring The Human-Ape Paradox" symposium in October 2020.